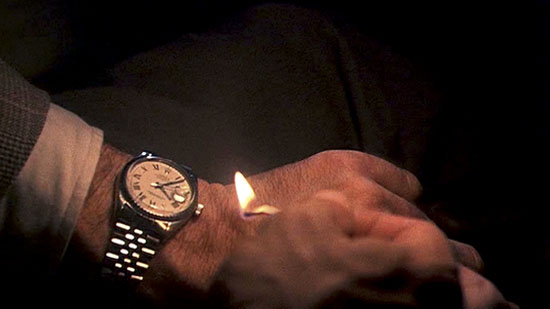 Curiosity impelled me to visit the current Power Plant exhibition by international sound and video artist Christian Marclay. Called a masterpiece, it is a 24-hour, looped, single-channel video composed of film clips that show the time, minute by minute and hour by hour.

Reading about it made me question how this could be a masterpiece, given all of the clever mash-ups that are readily available on YouTube, and how simple the concept seemed to be.

But I thought, “How bad can it be if it’s considered a masterpiece?” And so I went.

And I loved it. Others can judge whether it’s a masterpiece or not, but I can unequivocally say that it is a pleasure to experience. In fact, it’s fun.

Marclay and his team have assembled film clips from an unbelievably wide range of movies, each one showing the time, minute by minute (60 minues x 24 hours = 1,40 clips). They are spliced together to move through 24 hours, synchronizing with real time. Bombs tick down, people check their watches, alarms go off, and the clock strikes, as one piece seamlessly slides into the next, often creating a found narrative. The meticulous nature of this work is part of the fascination it has engendered. It has become a phenomenal art-world success.

Given that time has the starring role, there are certainly big ideas in play. While the relentless quality of mutability, of mortality itself marches along, there are also flashes of humour and whimsy.

Actors appear at one point in their careers and reappear older or younger in another movie fragment. Humphrey Bogart opens a door with Johnny Depp on the other side, or perhaps it will be a workman on a shop floor, played by an unknown.

In general, films, plays, music and other art forms transport the viewer into a timeless space, whereas The Clock keeps perfect time. It is possible to attend one of the 24-hour screenings and experience the whole thing, but whenever one enters the space, the projection is on at that time and the filmed setting corresponds to that time of day.

The work becomes an essay on the range and enormity of film material in existence, underscoring the monumental nature of the project. But there is a playful aspect too, a Trivial Pursuit sort of exercise that runs though the mind as excerpts come and go–this no small feature in the overall visual experience. Comfy chairs, high-quality production values, and a steady stream of clips knitted into a quasi-narrative offer an unexpected delight.

The Power Plant at Harbourfront is regarded as a front runner in terms of (often international) contemporary art. While some installations can be regarded as esoteric and obscure, The Clock is accessible without giving up its credentials as fine art. In fact, the National Gallery of Canada has purchased this work, so hopefully it will have future screenings across the country.

It would be a good place to start when introducing someone to contemporary art, and a delightful sojourn if you happen to be in the neighbourhood. And it’s FREE. 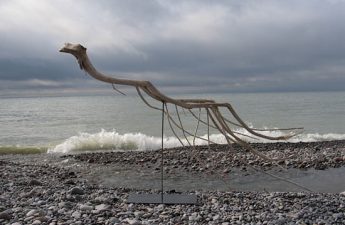 Sally Thurlow’s Reclamation at the VAC