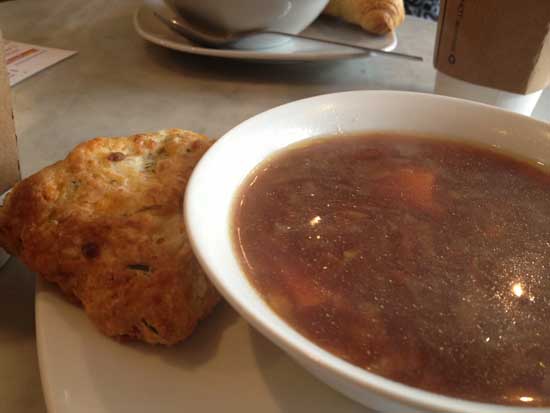 Earlier this year, a the Hot Roots Soup Fest brought some spice to downtown Oshawa. Some of the OshaWhat crew checked it out.

The soup: Vegetable soup–root veggies and tomatoes topped with fresh cilantro. There aren’t many vegetarian options at Buster Rhino’s, so it was great to see this BBQ spot participating in a vegetarian soup festival! Owner Darryl Koster said the soup was created by his head chef, and even he had a couple bowls of it that Wednesday alone.

Was it souper? Yes it was!

Hot Roots Festival from the eyes of Norah

Jacquie Severs and I ventured out on two lunch excursions. First we went to Isabella’s Chocolate Cafe where we had the most delicious Borscht soup. The traditional Ukrainian delight was a wonderful use of one of my personal favourite root veggies, BEETS!

The soup was an explosion of flavour with sweet and peppery notes. Isabella’s: please make this a staple on your menu (if it isn’t already). We paired it perfectly with a chive and cheese scone and cheese croissant. The only complaint I have is the bowl finished too quickly.

The next day we were off to The Table. As they were one of the organizers of the Hot Roots Festival we felt it would be a “must stop” location. On a daily basis The Table has an impeccable soup selection offering a wide variety of specials made fresh from scratch. On this visit, I choose the dal lentil with spinach soup. This dish is meatless, but high in protein.

The flavours were dal-icious! I would order this again as it is featured on their weekly menu but the only complaint I have is there was a lack of root vegetable soups in honour of the festival. Note that if you are a soup aficionado, be sure to pick up one of their “Buy 10, Get 1 Free!” cards that entitles you to a free 12oz soup of your choice when you have collected 10 stamps.

Love the concept of having the Hot Roots Soup fest. Wish it lasted longer than a week because there are so many locations participating it was a challenge to even make a dent!

OshaWhat caught up with one of the festival’s organizers, Pramilla Ramdahani to learn more. The idea was born in December, when a few like-minded people wanted to come together to do something fun that would bring awareness to the energy and action heating up downtown Oshawa. The first idea was to create the biggest holiday salad in Oshawa, but the winter weather soon inspired a shift to soup. 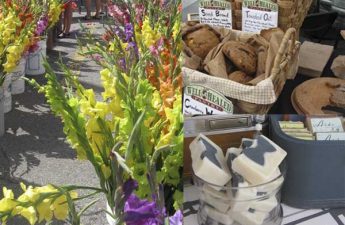