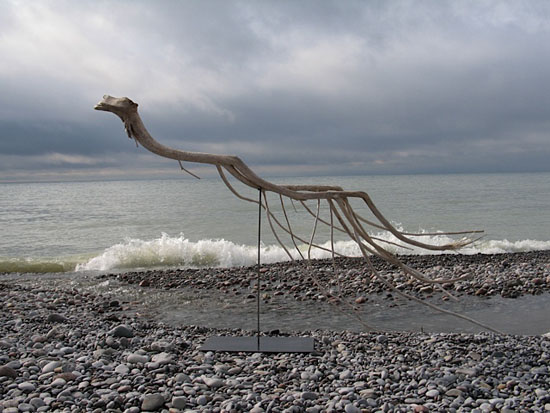 Recent works by Sally Thurlow are on exhibit at the Visual Arts Centre of Clarington from April 21 to May 19, 2013. In June they will travel to Redhead Gallery, 401 Richmond St. Toronto.  The opening reception is April 21, and also there will be a celebratory afternoon of readings and music at the VAC  on May 11 with Jonathan Bordo, Maralynn Cherry, Merike Lugus, Gregory Ward and Margaret Rodgers (aka this reviewer).

The driving force in the show is a series of driftwood characters  that animate the gallery space  in an interconnected dance of personalities. Accompanying them are several wall mounted reliefs that reproduce in large scale the porcelain shards resulting from Thurlow’s beachcombing along both Lake Ontario and the Gulf of St. Lawrence. In addition there are several  vessels created from aluminum mesh and enclosing various pieces of flotsam plus rocks with varied geological ancestry.  For example, ”Strata”  includes  clam shells, snails, seaweed, a fisherman’s knotted rope fragment, and four rusty spikes .

The art of repurposing some of the detritus that washed ashore, finding beauty in the leavings of both humans and nature, has been an ongoing pursuit for Thurlow. Viewers may recall her series of canoes, some made from steel belted radial tire scraps that “wash up” on the roadside.  Another, titled “Ship of State”,  became both subject and matter for a vessel built upon the myriad of reports that even a small bureaucracy such as the municipality of Clarington generates. In 2003 she created “Cliff Sentinels” that stand in a circle overlooking Lake Ontario. Each one of these fourteen-foot high figures was originally driftwood pulleyed up from the shore below and recombined into  twelve enormous beings, no doubt invested with mythological import by passing sailors.

The reach of Thurlow’s environmental concerns extends beyond artmaking to include active involvement in the community’s recent debate over the waste incinerator being built in Clarington. Her veneration of the lands that look out onto Lake Ontario becomes the impetus for the reanimating of washed up pieces.

She speaks of “the essence of the living form of the trees”. Buffeted by nature’s powerful forces, their remains arrive on shore twisted and pummeled into smoothed, suggestively anthropomorphic forms. Almost animal, almost human, they are brought to life by creative impulse. Seemingly unembellished, the  artist’s hand is evident in that they are  pruned, glued, then sanded and painted. In addition, several have been cast in bronze. Thurlow points out that “[t]he Newfoundland figures are different from the smoother, less angular ones made from Lake Ontario driftwood, but all of them look entirely vernacular, still appearing as spirit creatures, each with a message, from a world of dreams and imagination.” (artist’s statement)

Titles such as ” Just Ask”, “Old Bones,” and “Bug – Eyed,” reflect a playful milieu, where these creatures, after a long and tortuous journey, can dance among themselves. The figures, the wall shards, and the vessels interact in a magical riff on a liminal world.

The VAC exists in a building that was originally a barley mill and has been effectively repurposed as an art centre. It is a fitting location for the first comprehensive showing of Thurlow’s art from found materials. Reclamation indeed. 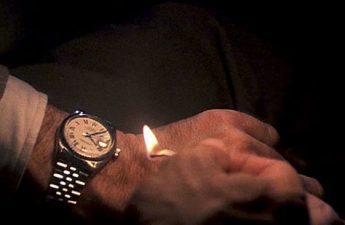