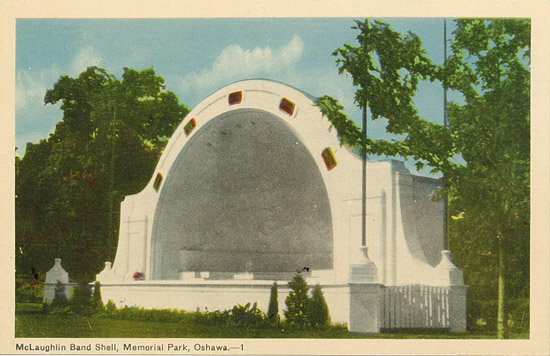 “Get the best architect, build the band shell, and send me the bill,” said R.S. McLaughlin when the Oshawa Civic Band needed a home. The McLaughlin Band Shell has been an important part of Oshawa’s cultural community since 1942. Dream about warmer weather with us as we look back at the origins of this popular summer hot spot. A popular invitation that might be heard around Oshawa on a Wednesday evening in summer is, “We’re heading down to the band shell tonight, would you like to join us?” The McLaughlin Band Shell at Memorial Park is a wonderful place to spend a warm evening and enjoy musical entertainment. Since it was officially opened in 1942, it has been used to provide band concerts and other open-air programs for the people of Oshawa and surrounding areas.

The band shell was built to give the Oshawa Civic Band a place to perform and practice. Prior to this, practices were held in the Orange Hall over a grocery store near the four corners and the Armouries on Simcoe Street. During World War II the Armouries required the use of the band’s practice room to do medical inspections on servicemen, so once again the band was left without a home.

The Oshawa Civic Band would finally get a place of their own when Colonel R.S. McLaughlin built the band shell in Oshawa’s Memorial Park. When he was approached about the idea, hee was quoted as saying, “Get the best architect, build the band shell, and send me the bill.” The final bill was approximately $18,000, and McLaughlin had to pull some strings in order to get the structural steel required for the building–one must remember it was during World War II when it was built and products like metal were rationed.

Upon completion, it was known as one of the finest in Canada, equipped with a band room, special lighting effects and amplifying equipment. A celebration was held once the building was completed, with 4,000 people in attendance according to local newspapers. People sat on the steps of E.A. Lovell School and across Centre Street, and R.S. McLaughlin asked the mayor to give him a dollar. He did, and McLaughlin gave the City of Oshawa the deed to the band shell and the land on which it stands.

In the 1950s, demand for the band shell increased and the Oshawa Civic Band outgrew their band room, originally built under the stage. Once again, R.S. McLaughlin helped finance the construction of a bigger band room at the back of the structure.

Located on the east side of the band shell are a series of murals that commemorates the 130 year history of Oshawa’s Ontario Regiment. The murals were painted by John Hood of Toronto, Ontario in 1996. The detail in this set of murals is exquisite; all the medals depicted at the bottom of the mural are accurate representations of Canadian military decorations.

The Oshawa Civic Band continues to practice every Monday night. If you’re keen to check out the murals and some live music, their summer concert series will happen every Wednesday evening in the band shell. Start thinking of summer plans and find out more about the Oshawa Civic Band by visiting their website.